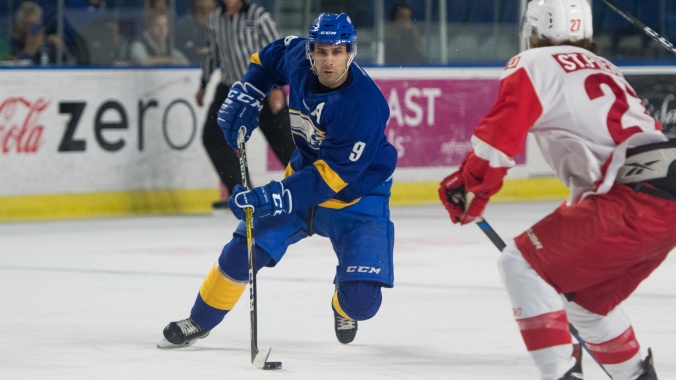 September 16 UBC- UBC took on SFU in their first game of the 2017 Captain’s Cup pre-season tournament. In a roller coaster of a game UBC prevailed over the Clan 8-3. A five goal third period thrust UBC to victory in the first game of the season.

Deadlocked after forty minutes of play, the Thunderbirds came out in full force in the third period to score four goals in a five minute span, adding another one later in the period.

The Thunderbirds looked the superior team throughout the game, but struggled when it came to penalty killing. UBC had trouble staying out of the box in the first two periods.  Third year defenceman Kyle Becker collected a team leading six penalty minutes on the night, including a four minute major for a hit on SFU’s Mac Colasimone who was forced to leave the game due to concussion protocol and did not return. UBC opened the scoring shorthanded, but that’s where the good times ended being a man down for the T-birds; as they conceded all three goals on the penalty kill.

UBC seemed to have SFU all figured out after the first period, leading the Clan 2-0 after the first period and outshooting their cross town rivals 10-2. UBC’s first goal came at 7:39 in the first period, when Dave Farhand collected the puck behind the net and sent it to Manraj Hayer who fired it past the goalie who was blinded by the crowd in front of the goal. Hayer added a second goal to his name later in the period on the power play, beating SFU’s Ryan Sadrin low on the blocker side.

The second period was one to forget for the home side as they got into early trouble, spending nearly five minutes trying to kill multiple 5 on 3 penalties. After killing the first two penalties with some moments of brilliance from former Seattle Thunderbirds goalie Rylan Toth; UBC surrendered two goals in quick fashion to Tyler Hasham and lost the lead fifteen minutes into the second. The blue and gold seemed to find their stride again with five minutes left as they were dominating the game at even strength. UBC fought back and found a goal from Carter Poppoff after he collected two of his own rebounds and eventually found the back of the net on his third attempt. SFU netted their third of the game with just seconds remaining in the period, leaving the game tied after two.

The third period was controlled by UBC. The team who had trouble with penalties was able to stay out of the box and dominate the whole period. Manraj Hayer added another goal to his night leading him to a hat trick and UBC to an 8-3 pre-season Victory over SFU.

UBC head coach Steve Butenschon shared his thoughts on the rough second period and how he thinks his team looks for the upcoming Canada West season.

“We got a bit of a lesson in hard work,” said UBC’s Butenschon in response to the second period penalty problems and the game as whole. Butenschon also highlighted his team’s work ethic in the third period saying “The cool thing as a coach was to see the group stick together and stay composed and come out in the third period and kick it up a notch in work ethic.”

When all was done and dusted, thirteen UBC players got on the score-sheet in the matchup. UBC continues their pre-season next weekend against Queens on September 22 and 23 and closes the Captain’s Cup on September 30 at home against Trinity Western.