June 1st 2018, Vancouver,BC- The world has been waiting, and now we are just two weeks away from the greatest sporting event on earth. The FIFA world cup is set to kick-off on June 14, and despite all of FIFA’s antics in recent years the tournament is still garnering a massive following throughout the world.

This edition of the world cup will look a little different than other years. Constant participants such as Italy, Chile and the Netherlands all failed to punch their ticket to Russia leaving spaces for debutants Panama and Iceland as well as teams like Peru who haven’t qualified in decades.

With all of the changeover in this world cup, it will be as interesting as always to see which country comes out on top as well as which minnow takes a real shot at the tournament. Here at Van City Sport we are going to preview every group set to compete in Russia in the coming weeks.

Looking at group “A” it is pretty clear it’s not the most talented group. Some have said there may have been some fixing in the way this group was drawn, since the hosts landed what most people think of as the easiest group in the tournament.

Host nations are always an intriguing anomaly at any world cup, especially when they are teams who might not otherwise qualify. Looking at the current Russian situation, it is hard to call whether they will lean towards crashing out like 2010 hosts South Africa or driving through the tournament like the South Koreans did in 2002.

The Russians have been poor in their last few major tournament’s, failing to make it out of the group stage in both the last world cup and Euro 2016. In their seven world cup appearances they have never made it out of the group stage. Since the debacles of the last few tournaments the Russians have only fallen farther down the orld rankings and are now going into their home world cup ranked 32nd in the world, and the lowest ranked team to compete in the tournament.

Other than their obvious problems on the field, the Russians also have major locker room problems to deal with as well. Experienced players such as Goalkeeper Igor Akinfeev and former Chelsea midfielder Yuri Zhirkov as well as others have had disagreements with the coach and this has led  Stanislav Cherchesov into benching some of his key veteran players.

Russia will have to rely on young players if they are to get through the group stage and Manchester united transfer target Aleksandr Golovin will be called upon to play his best to give Russia any shot of beating out Egypt and Uruguay. 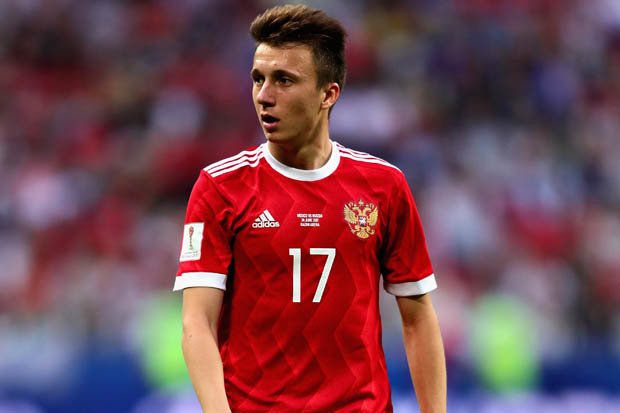 The Russians should not have any problem with the Saudi Arabians, but Uruguay and Egypt will prove to be too much for the hosts to handle for the Russians and even if they were to make it through to the last 16 they would face either Portugal or Spain, both of which would trample over the host nation. Russia’s corrupt world cup fairy tale will most likely come to an abrupt end after just three group stage games.

On the other side of the opening match is Saudi Arabia, led by former Argentina manager Juan Antonio Pizzi the green falcons will look to improve on their best World cup performance which was a last 16 appearance in 1994.

The World Cup will be Pizzi’s first competitive matches in charge of the Saudi’s after he took over just seven months ago from Bert van Marwijk. Although he is a recent hire, Pizzi has been able to completely overhaul the tactical outlook of the squad in the abundance of friendlies he has organized. Throughout qualifying the Green Falcons approached games in the way one would expect them to, b sitting back and trying to beat teams on the counter. This meant that the team relied heavily on their wingers, and were unable to play on the front foot when the opponent approached the game in a similar fashion.

Since the change in management they have started to build from the back and have been able to play on the front foot despite not having the most skill in the world. The key for them will continue be to continue to be solid defensively as they still lack a prolific goal scorer to complement their new style of play. The veteran centre-backs should be able to handle the physical demands of all members of the group, but are likely to have severe problems against the more skilled players in the group including Edison Cavani and Luis Suarez of Uruguay.

A player to watch for them will be Salem Al-Dawsari who has spent the past season on loan to Villarreal in Spain and will be relied upon to control the midfield for the Falcons.

Saudi Arabia’s only player to play outside of the country

The squad is built entirely of players who play in the domestic league other than Al-Dawarsi and even if they all play their best football, the level and quality is just not there for the Saudi Arabians.

For the first time Egypt has qualified for a world cup that is not in Italy. They qualified in 1934, and didn’t qualify again until 1990 when the tournament return to Italian soil.

Boasting a Balon’dor hopefull in Mohamed Salah, Egypt could take a real shot at winning this group and possibly even progressing through a couple of stages in the knockout round. Even though Salah is un-doubted the team’s main facet, the Egyptians are far from a one man team. Managed by Hector Cuper, the 2017 African cup of nation’s runners up have a lineup that includes premier league players Mohamed Elneny, Ahmed Hegazi, and Ali Gabr while the team also includes 45 year old goalkeeper Essam El-Hadary who is set to become the oldest player ever in world cup history.

Through Cuper’s first 32 games as manager he has built a stingy defense and Egypt has only conceded a measly 18 goals. Defense won’t be much of a concern for the Egyptians as they know that if they can lock up shop on the back end and get the ball to their forwards they have a good chance of advancing.

The Pharos have played a 4-2-3-1 recently and possess attacking flare in players such Mohamed El-Saied and Liverpool’s Mohamed Salah as well as striker Ahmed Hasan. The attackers may find it tough to score many goals, especially against such a high level of competition as they will see in Russia. Although the goals may come few and far between, having a side that is so difficult to break down means that they don’t need many goals to win games.

The only concern for Egypt now lies on the health of their star player Liverpool’s Mohamed Salah. The winger broke onto the English Premier League scene this year and won the golden boot with his 34 goals and led Liverpool to their first champion’s league final since 2005. In the Champions League final against Real Madrid, Salah went down injured when Spanish centre-back Sergio Ramos pushed his shoulder into the ground forcing an injury in which Salah had to be substituted off. Despite leaving the stadium in a sling, Salah is expected to be ready for the world cup but it is unclear whether his injury may hold him back from his full effectiveness for Egypt.

Regardless of Salah’s health, the Egyptians should progress to the knockout stage, most likely as this group’s second seed behind Uruguay. If their defense holds tight, and they find a result against the Uruguayans Salah and Egypt could even find themselves as first seed from group “A” heading into the knockout rounds.

The star studded Uruguayans are one of the countries who could be a dark horse to win the whole tournament. The quad is highlighted by world-class forwards Luis Suarez and Edison Cavani, as well as experienced defender Diego Godin.

Unlike other teams in the group, Uruguay has had a very stable managerial situation over the past 12 years. Óscar Tabárez is set to manage his fourth world cup for the country, and will hope to build on his best result which was a 4th place finish in 2010. Throughout his time in charge, the South Americans have used similar tactics that have worked for them in the past. The team has taken a similar approach to that of Egypt and has put an immense focus on the defense, and gets most of their offence from building from the back. With such star studded attackers, the Uruguayans do whatever they can to get them the ball.  The theory behind these tactics is that the world-class forwards can pop in 2-3 goals per game without much offensive support, and if the defense holds tight that should be enough to win.

Considering that the backline is anchored by Atletico Madrid centre-back Diego Godin, they should be in fine shape to continue using their traditional tactics in Russia. The only worry with this approach is that Godin, along with the rest of the backline are getting to be on the older side and may not be able to handle parking the bus defensively for an entire tournament.

The midfield has seen an abundance of Young stars join in recent years, including Federico Valverde, Rodrigo Bentancur, Nahitan Nández and Matías Vecino and with these players-tooling the centre of the park the uruguayens could have other options when it comes to attacking rather than solely relying on long balls to the strikers. Tabarez has said he plans to start the tournament using a more possession style approach that harnesses the skill of the younger players in hopes of adding another element to their play. If his new approach doesn’t work against the Egyptians in their opener, no one should be surprised to see the Uruguayans revert back to their old-fashioned defensive ways.

With either way the Uruguayans play, getting through to the knockout stages should be almost a guarantee from this group. Suarez has likely learned his lesson from his biting ban, and having him as well as Cavani for an entire tournament will be a massive advantage. Should everything go to plan for them, they would face either Spain or Portugal in the round of 16 and getting past either of those teams is a doable task. The quarter-finals is a good target for this group of aging stars, as getting past Germany is most likely a step too far for them.