2018-11-13 Vancouver- In an unassuming boardroom in a Vancouver hotel, a  little bit of Canadian soccer history was made.  The upstart Canadian Premier League hosted their inaugural U Sports draft, announcing the first players to earn invites to pre-season CPL camps. The draft is also the first of its kind in the country, with no other sport having drafted purely from U Sports.

The draft differed from other drafts, as it was held behind closed doors on Monday November 12, with the selections being made public 24 hours later on the 13th. Prior to the draft, an unweighted lottery took place; also behind closed doors and awarded first overall pick to Calgary Cavalry FC. The draft took on a “snake” format, with picks 1-7 going in numerical order, and reversing for the second round. 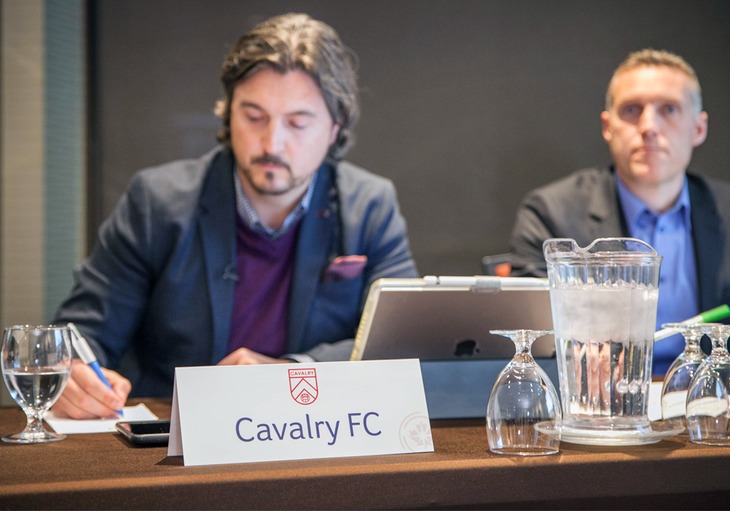 Calvalry’s head coach Tommy Wheeldon Jr was tasked with the first overall pick, and made a selection that would go against the trend of the rest of the day. With the pick, the selected Carleton University forward Gabirel Bitar, whom he had watched at USports nationals earlier that week. While many of the other teams went local with their selection, Wheeldon Jr opted to go out of province to nab the proven goalscorer he saw in Bitar.

“He’s a forward who fits the way we want to play,” Wheeldon Jr. said.  Before going on to highlight his movement and soccer IQ by adding “We want to be dynamic. Gabriel moves well; he’s fast-twitch; he’s playing off the shoulder; he’s into pockets.” 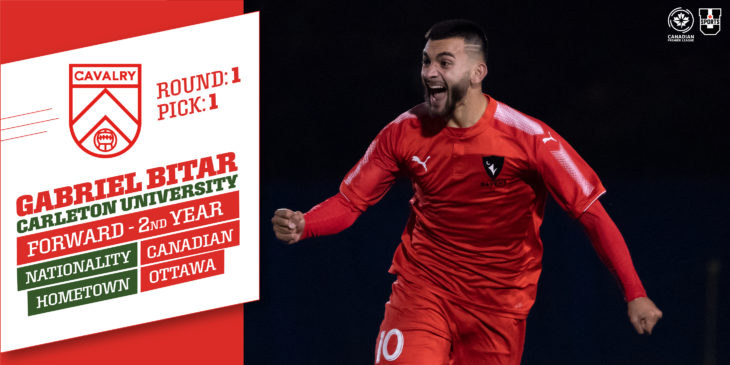 The second year Carleton forward was awarded the U Sports rookie of the year in 2016, following a campaign in which he scored 16 goals. The Carleton Raven was just the first of 21 players to be drafted into the CPL on tuesday, and was one of the standouts in last weekend’s U Sports championship.

Most teams kept it local, drafting from universities fairly close to them, although no club drafted more close range talent than Vancouver Island’s Pacific FC. All three of PFC’s picks came from the University of British Columbia, including what many consider to be a steal on their first selection (6th overall).

Entering the draft many pegged former Whitecaps FC 2 midfielder, and 2018 U Sports rookie of the year Thomas Gardener as the best player available. Gardener had an exceptional rookie campaign for the Thunderbirds, scoring some world-class free kick goals in the process. Hailing from North Vancouver and coming up through the Whitecaps system, he was already familiar with PFC assistant coach James Merriman; who coached in the Whitecaps program prior to taking the CPL job.

Gardner plays for the Whitecaps USL side in  2017

“Tommy already knows where he wants to go next before he receives it.” Said Merriman “He shows high intelligence that’s complemented by his technical ability. I see a lot of potential in him.”

For Gardener, he is fresh  off a rookie campaign in which he scored six goals and led UBC to the Canada West title, it is the perfect time for him to take another crack at professional football.  He is a player who could have an immediate impact, and of course is still young enough to have untapped potential.Something the coaching tandem of Michael Silberbauer and Merriman will hope to uncover.

The former Whitecap certainly highlighted Pacific FC’s picks, although the other two cannot be forgotten.

Also formerly from the Whitecaps program was PFC’s second round pick in winger Zach Verhoeven. He has spent the past three seasons with the Thunderbirds and has become a key piece of their attack. His ability to run off the ball, paired with his elite crosses and silky footwork make him an invaluable piece to any teams attack. He has wreaked havoc on the Canada West throughout his time in the thunderbirds, and has openly said that he wishes to turn pro one day. Verhoeven led UBC in assists this season, getting helpers on five goals  while also chipping in two of his own. 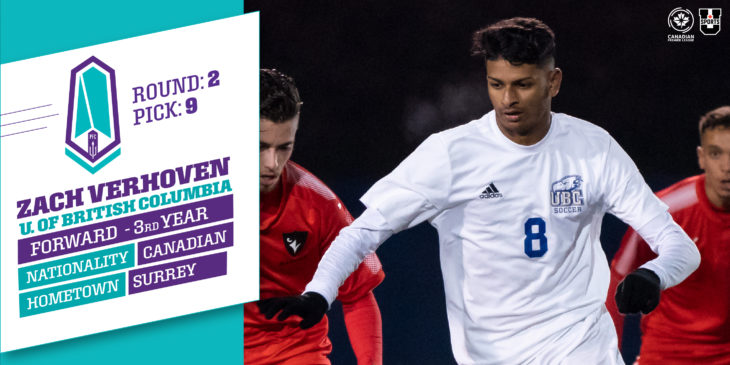 For their final pick and third Thunderbird of the day, Pacific FC went with first year midfielder Nick Fussel. Another graduate of the Whitecaps program, who like Gardener spent time with WFC2 before it’s demise. He has been a reliable presence in the Thunderbirds midfield alongside Gardener, and has made the most out of his time with UBC. Although he may not have put up astounding stat lines, his contributions were felt throughout the pitch.

“He’s unassuming and might not catch your eye right away, but the more you watch him the more you appreciate the way he plays.” said Merriman, perfectly summing up the type of player the club picked with their third selection.

Merriman was very comfortable with these three as he had spent ample time with them while with the Whitecaps. “We’re familiar with these players. I’ve worked with them and watched them progress.” he said following the two selections. For Pacific FC the familiarity is certainly an asset, and is one that club president Rob Friend alongside head coach  Michael Silberbauer trust.

All of the other teams also tended to draft fairly geographically, but not as stringent as Pacific FC did.

With their selections, these players will all be invited to CPL training camps in the spring; where they will try to earn a professional contract, or a standard development agreement. An SDA would allow them to maintain their university eligibility and continue their studies, while a professional contact would commit them to the club full time.

The draft signifies a historic moment in Canadian soccer, as it brings the first players in the systems of these new teams. The seven CPL clubs will now move on to the next step in their roster building, attempting to sign players, and extending camp invitations to the outstanding performers from the leagues open trials.