The Nat Bailey Stadium, built in 1951 and originally called “Capilano Stadium,” has been home to many baseball clubs through its tenure, and is currently the home of the Toronto Blue Jays single-A affiliate the Vancouver Canadians.

The stadium has undergone many revisions and expansions since 1951, most of which have come in the past ten years under the Vancouver Canadians brand and owners Jeff Mooney and Jake Kerr. Most recently, the stadium was expanded by 1,500 seats in 2015, adding another dimension to what has become a true Vancouver treasure.

While the stadium is special in and of itself, it lends its charm to creating an immersive “old time” baseball experience. Over 6,000 fans regularly turn up to “The Nat”  on warm summer nights in east Vancouver and create an atmosphere unlike any other in the city.

As previously mentioned the old charm is what makes one thing that makes ballpark so special. When entering the stadium, the first thing seen is a turnstile; something many sports venues don’t have anymore. After rushing through the clicking turnstile you are greeted with the charm of a simple, yet complete concourse. The concourse, which  was re-done in 2010 maintains the retro vibe.

In the concourse one can indulge in the many food options offered, everything ranging from the simplicities of hot dogs, to gourmet cuisines such as freshly made sushi. Other than food, the crowded-bustling concourse displays many murals and alert boards. The standings are eloquently written in chalk on a chalkboard, and a list of players who have passed through Vancouver on their way to the major leagues is displayed alongside. All of these characteristics help create the old timey vibe the C’s aimed for when designing it. 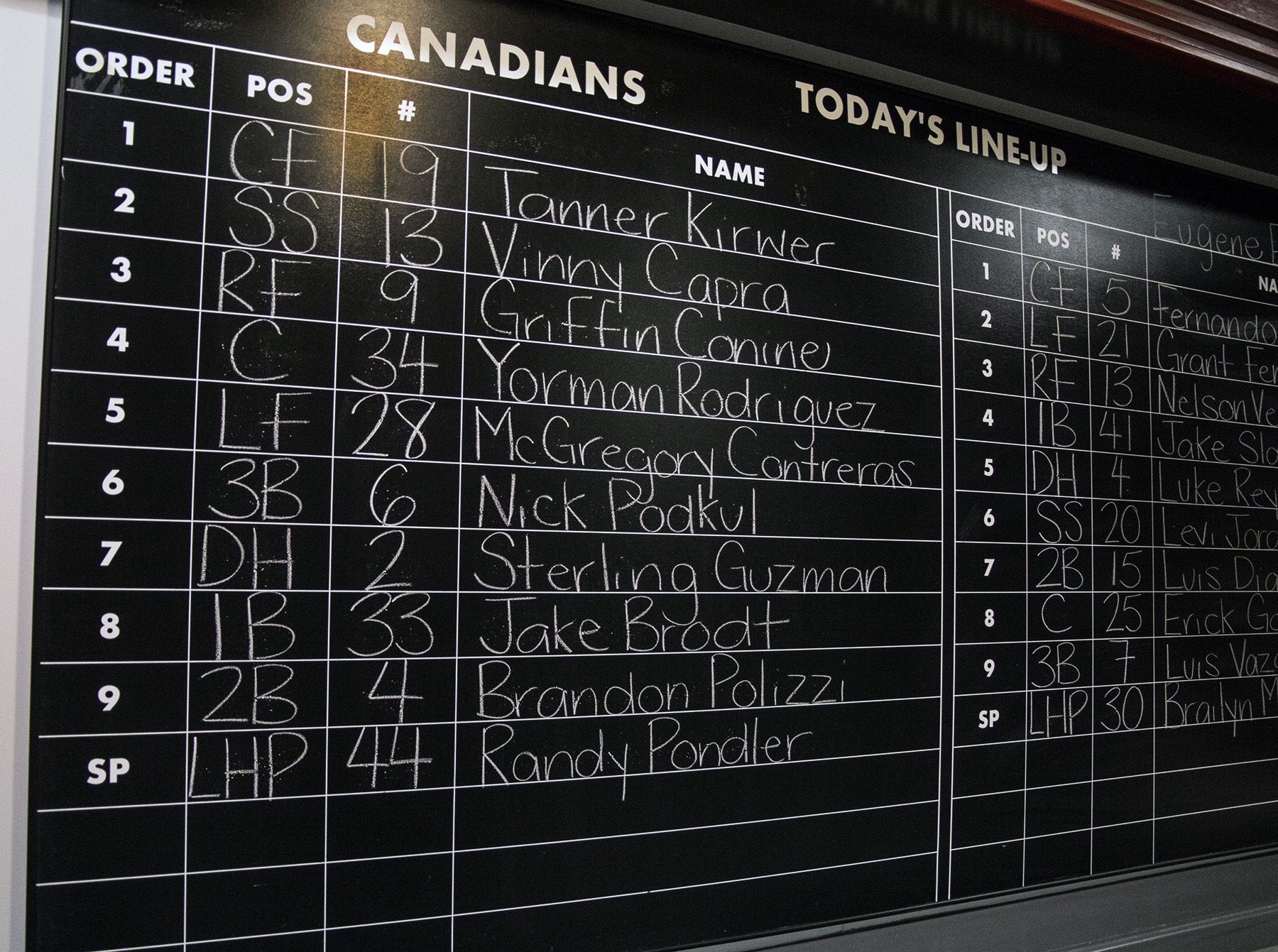 While the concourse is pleasing, it is not the only place to get food. Down the third base line, there is a grill which offers one of Vancouver’s most infamous dishes; and something The Nat has become notorious for. What is it?

Not a regular hot-dog though…

Not a foot-long, that’s too simple.

The third baseline concession offers a THREE FOOT-LONG hot-dog. Yes, you read that right, and it has become a fixture in the Nat Bailey experience. 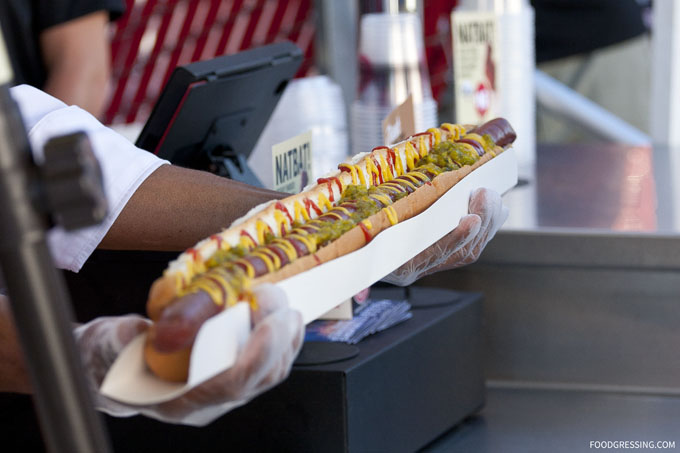 While the food is all delicious; the grandstand is something else.

The initial sight seen when walking up the stairs from the concourse  is a luscious, well kept baseball diamond situated ahead of the rolling trees of Queen Elizabeth Park. That view instantly ingrains itself in every visitors memory. When looking closer, one can notice the hand turned scoreboard, similar to the one at Fenway Park, and the lack of a modern bullpen for the visiting pitchers. The view, and simplicity all add to what is a truly unique baseball experience.

The seats and grandstand continue to jibe with the retro theme of the whole ballpark. The fans sit on stand long benches, rather than individual seats; and the sight of families dividing up their concession gatherings is an adorable sight to see. However, for the more modern folk the C’s do offer individual seats lower to the field, although these seats do not give the same experience as the curling wooden benches.

Fans and players alike are charmed by the ballpark, and for the players it is an experience unlike many of them have had before. Being a minor league club, the C’s are stocked by Blue Jay’s prospects and draft picks; many of whom are under age 24. With such young players, the majority of  their baseball tenures have been spent in training centres and modern sport institutes, not old-time ballparks.

For Jays 2018 second round pick Griffin Conine, he was surprised by the Nat Baileys vibe when he first arrived. s“It’s not what I was expecting it to be like where I started,” he said in an interview with The Athletic’s John Lott. “Everyone says it’s a really long road and when you start out, there’s not many people that come out for the games and you don’t always play at the nicest venues and stuff like that. But I think we’ve got the nicest field in the league, which is it’s pretty great. That’s our home field, and the fans are awesome.” 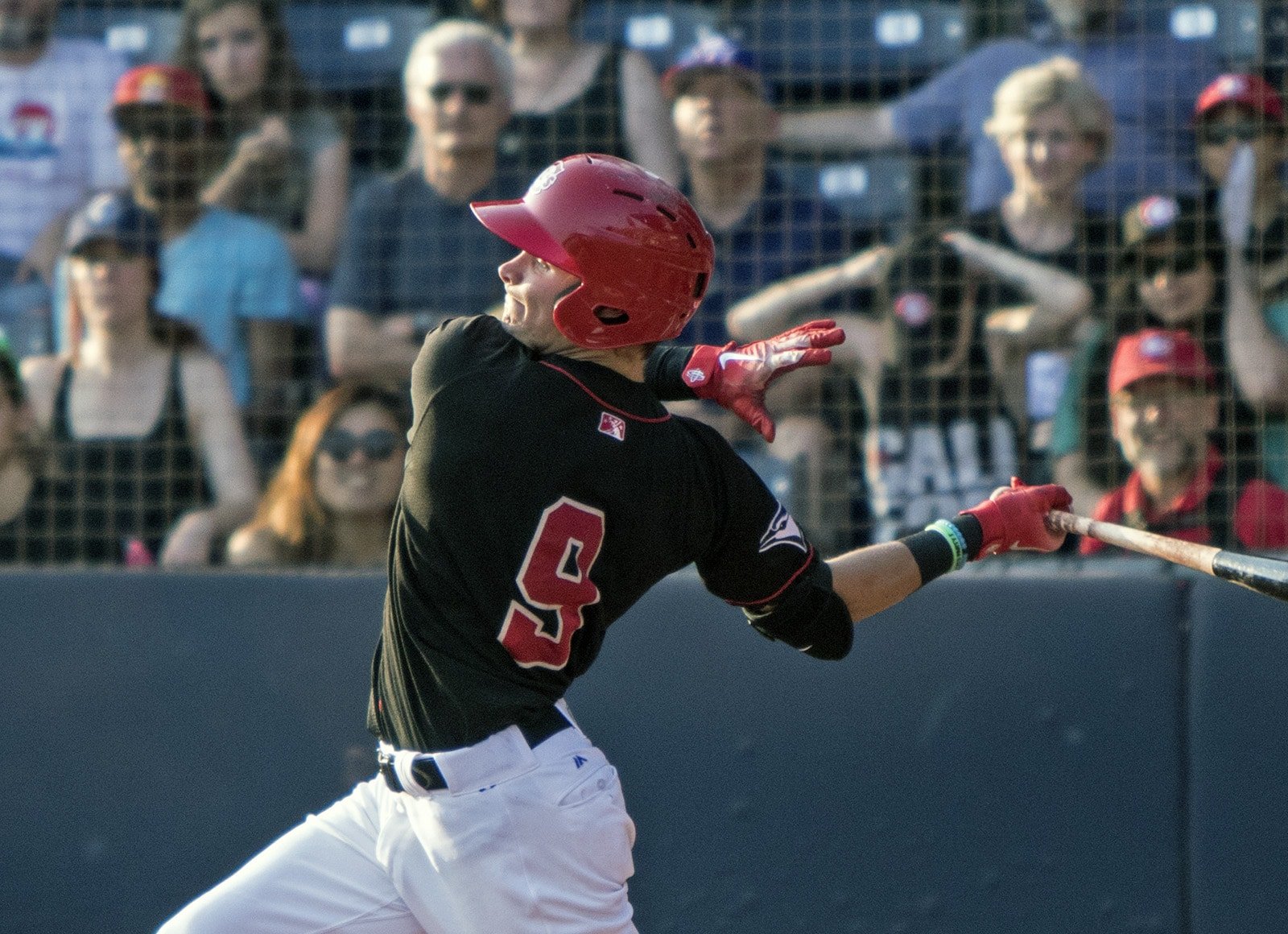 The Nat pleases everybody, although fans and players have very different experiences. And even within those sections, the way one enjoys the old park varies exponentially. Whether a millennial going out with friends, or a young family looking for a fun outing; the old charms which the Nat Bailey offers create a special experience for everybody.

With everything a night at The Nat offers, not many people truly care about the on-field product, and that is one of the reasons why the C’s remain in one of the lower levels of professional baseball. In 2018 Van City Sport surveyed fans in the stadium about whether they knew how the team was performing, very few did. When asked why they continue to come out to the ballpark despite not caring about the game, it always came back to the stadium and the experience enjoyed on a warm summer Vancouver night.

Everyone has a different experience, but the words charming, retro and nostalgic. Can well summarize the overwhelming pleasure people enjoy  from taking in a ball game at the Nat Bailey Stadium.

One thought on “The Nat, Vancouver’s Treasure”