In their heyday, the gameday experience at Canucks games was like no other. 18,000 screaming, passionate Vancouverites all jamming out to one of the best teams in hockey, leading to a truly electric Rogers Arena atmosphere. In recent years though, as the Canucks play has worsened, so has the arena’s atmosphere. What was once undoubtedly Vancouver’s best sporting atmosphere has become a shell of its former self, and leaves sports fans wondering where they can find the best sporting experience in the city.

For the purposes of this article, we will only be looking at teams who call Vancouver home and are at the highest level the city has to offer. That rules out special events such as the Canada Rugby Sevens, World Juniors and Olympics, as well as secondary teams such as the WHL’s Giants. Leaving us with the Canucks, the National Lacrosse League’s Warriors, Minor league Baseball’s Canadians, the CFL’s BC Lions and Whitecaps FC of Major League Soccer.

Technically they have been around since 2014; the NLL’s Warriors are in the midst of their first season at Rogers Arena. The team, then known as the Vancouver Stealth has been in the Lower Mainland since 2014 playing out of the Langley Events Centre. 2018 saw Canucks Sports and Entertainment purchase the team, rebrand them and relocate them to downtown.

The Warriors have created a very unique game day experience. Presented with a similar game, and identical surroundings to the Canucks; a Warriors game is much more fan involved. The two most notable differences that fans will notice are the music played during play, and the fan zone behind one of the goals.

The music and announcer during games is commonplace in box lacrosse, and it adds a personal more “party” feel to the game. Hockey purists may not like it, and admittedly it takes some getting used to for a hockey fan, but it certainly adds a hype factor that may otherwise be missing. Aside from the music, the fan zone is something not seen in any other sport in Vancouver. Tables, Live DJ and dance zone behind the goal make the experience all the richer; especially for young people.

The Warriors have drawn crowds of around 7000 this season, and have created a unique sporting atmosphere. Whether it’s the best in the city is up for debate, but it is certainly unlike anything else Vancouver has to offer.

Soccer is world famous for its fans and the atmosphere’s they can create. One does not need to look any further than Vancouver to see the passion and electricity the supporters create at Whitecaps matches.

The club itself has advertised “The best sporting atmosphere in Vancouver,” and when they’re winning or playing a rival, this is undeniably true. There are different types of fans and supporters though. Unlike hockey where fans cheer when something happens, or when the board says “make some noise.” Whitecaps fans are singing and chanting throughout the entire match. The Whitecaps, like most soccer clubs have supporters groups, the ‘Caps actually have three. These groups are filled with the fans who are standing, and singing through winning and losing. Not all the fans are a part of this group, there remain people who just want to watch the game, but the supporters groups create an atmosphere that can be electric at times.

Supporters groups are rarely seen in other sports, although the Whitecaps supporters did try to add their talents to the Canucks. Unfortunately they were escorted out and have not returned. The Canucks are the only other local team and only team in the NHL to have a supporter group. However, “The Larschiders” as they are know only attend the sporadic game.

The Whitecaps match up to soccers stereotype for amazing fans, and with the passionate, loud supporters; they make a strong case to be thought of as Vancouver’s best sporting atmosphere.

BC Lions: (CFL) BC Place

The BC Lions and CFL atmospheres altogether have been a steady decline in recent years. The lions, who used to draw large crowds and open the upper bowl of BC place, have fallen a long way since opening the new BC place in 2011. The six time Grey Cup champions closed BC Place upper bowl in their 2015 season, after seeing their attendance numbers decline yet again.

The fanbase is by far the oldest in the city, and is also the most suburbs-based. If the team were to be located in the Fraser Valley, it would probably draw larger crowds as that is where most of the fanbase appears to be situated. As for the age issue, an easy solution would be to lower ticket prices to attract a younger demographic, however the club has yet to do this, meaning the connection to young fans only becomes weaker.

With an unpopular on field product, aging group of fans and tickets which are still not priced accurately, BC Lions games lack exuberance and attendance numbers. Given all of these factors, the BC Lions offer no where near the best sporting atmosphere in Vancouver.

Although the Canadians are The only non-major league team on this list, they offer a few things which no other team can.

First of all, their stadium is the only true outdoor experience in the city, and is one of the nicest small ballparks in all of the minor leagues. The Nat Bailey stadium is also the oldest of all the Vancouver venues, however it has been kept up to date with constant renovations and expansions throughout the years.

The tickets are well priced, making it a worthwhile outing for all kinds of people; ranging from young families, to teenagers, and even seniors. Also going for them is the fact they play in the summer, further drawing fans in who hope to spend a warm summer’s evening at the ballpark. While they have all these things going in their favour, there is one major drawback which limits the level of the atmosphere. The fact that they are not major league takes a portion of the anxiety out of the fans, leaving the on field product of less importance than the experience. If you’re interested in learning more about the C’s and their stadium, please check out my article on “The Nat, Vancouver’s Treasure.”

While the Canadians offer a true summer experience, the lack of major league presence means they are not able to be considered as one of vancouver’s best sporting atmospheres.

The big boys in town. The Canucks have everything going for them, and when they are playing well the atmosphere in the arena is nothing short of spectacular. Their gameday presentation has evolved over the years, and some songs have even ingrained themselves in the culture of the canucks. For example, on the occasional night that they play U2’s “The Streets Have no Name” in warmups, it brings on a nostalgic feeling for fans, reminding them of the teams glory days.

In recent years, as attendance has dwindled, the canucks have added more aspects to their game day experience. First was improving the in house cuisine, now including things as decedent as fresh pulled pork sandwiches, as well as stadium food staples. After the food, they added more features in their presentation. Johnny Canuck has taken a prominent place in the rituals, and the Viking clap has found its home at Rogers Arena. With these improvements in concession, and gameday presentation; the canucks are clearly making their best effort to be considered the cities best sporting atmosphere once again. 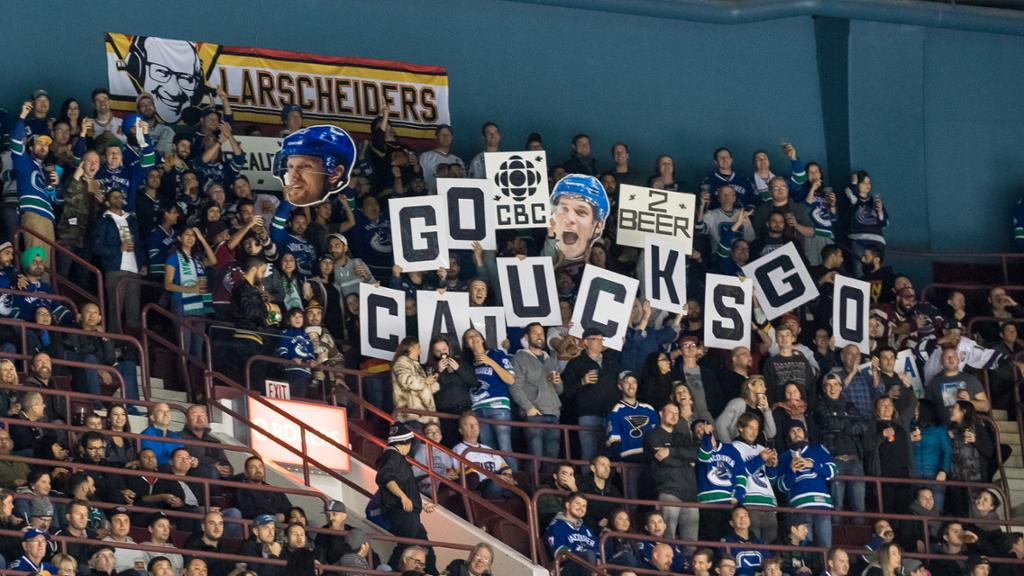 All of Vancouver’s sports teams offer their own atmosphere and own gameday experience, making it hard to compare against each other. We could look at attendance numbers, money spent by each fan , or even demographics; but despite all these tools, it remains hard to distinguish one elite sporting atmosphere. The Whitecaps probably have the potential to be considered in that position though. Affordable tickets? Check. Young fans? Check. Vocal support? Check. Now the only thing to come is a promising on field product. Once that is there, the Whitecaps will likely be considered the best sporting experience in the city.