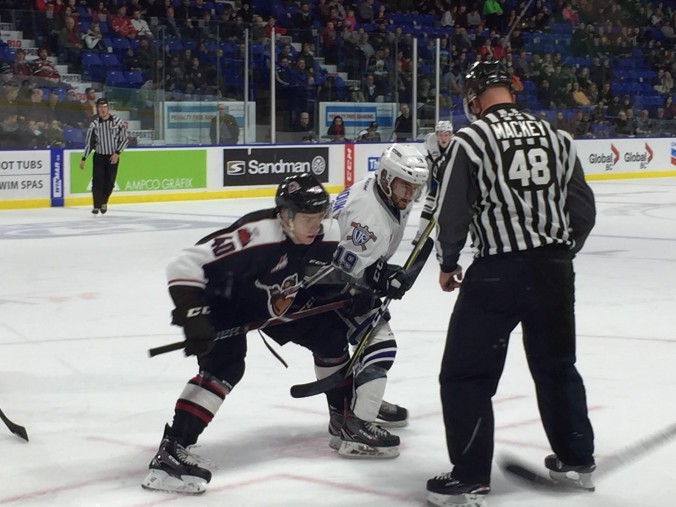 November 11 2017, Langley, B.C.-  Dante Hannoun and the Victoria Royals fell 4-1 to the Vancouver Giants Saturday night at the Langley Events Centre. The game was dedicated to the memory of Constable John Davidson of the Abbotsford Police Department, who was killed in the line of duty earlier in the week.

Victoria Royals forward Dante Hannoun was playing in his second game near his hometown of Delta this season, and was heavily prominent in Saturday night’s action. The former Greater Vancouver Canadian was in the foreground of the Royals’ power play, and found a few chances throughout the game; with his best opportunity coming ten minutes into the first period. Assistant captain Regan Nagy sent the puck into the slot for Hannoun who launched a quick backhand into the glove of Giants net minder David Tendeck.

Hannoun would play a significant role in the second and third periods as part of the Royals’ power play; which was ranked 10th in the league coming into the night. The Delta native found three shots as well as orchestrated multiple other chances in what was a well-organized power play from the visitors. Despite not getting any goals with the man advantage Hannoun was proud of his team’s performance saying  “I thought we just got to move the puck well and we were finding each other back door there and I think if we just bear down a little more, a couple of those good chances might go in.”  Having played a central piece of the power play, the draft eligible forward feels he can contribute more on the man advantage than he did against Vancouver.

As a player who has come up through the local ranks in the lower mainland, the diminutive forward is looking to impress the scouts this year as he hopes to be drafted into the NHL. Starting off with the North Shore Winter Club, Hannoun would soon make the jump to major midget, impressing in his 32 appearances with the Greater Vancouver Canadians before signing with the Royals at the beginning of the 2014 season.  The 19 year old credits the B.C. Major Midget League for a lot of his development, and he continues to stress the need for young developing players to work hard at the little things at every level to further develop their game and take the next step in their hockey careers.

So far this season Hannoun has put up 27 points in what has been a very successful start for the Royals. He and the Royals will look to bounce back from their loss when they take on the struggling Red Deer Rebels on November 14th at the Save-On-Foods Centre.  Puck drop is set for 7pm.