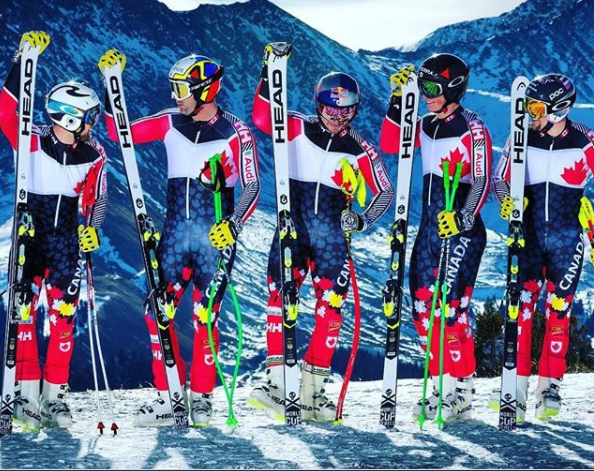 The Canadian Alpine Team prepares for the 2017-18 world cup

November 20 Vancouver, B.C.-  The first race of the FIS speed season is just a week away. Lake Louise, will host Canada’s only world cup event for the first time since 2015, due to 2016 being cancelled for lack of snow. The weekend will kick off with the men’s races, and be followed by the ladies races on December 1-3

Van City Sport previews what’s to come for the Canadian Alpine team at Lake Louise, and what the team looks like this season.

Canada’s Alpine team is in a transitioning period this season, with seasoned world cup veterans Erik Guay, and Manuel-Osborne Paradise entering what could be their final season on the circuit. Both skiers have had past success on the Canadian track, with Osborne-paradise winning the Super-G in 2009. Erik Guay has medalled twice on Canadian soil, but has yet to win a race. Coming off his world championship winning race in St.Moritz at the tail end of last season, Guay will look to open this year’s season with a strong race on home snow.

NorAm and world cup veteran Ben Thomsen will also push out of the gate in Alberta next weekend. Coming back from an injury, he will be looking to regain his form that he showed so brightly as a young skier. With multiple top ten finishes to his name, Thomsen will hope to get his first top ten on home soil.

A notable addition to the Canadian speed team for 2017-18 is Whistler native Broderick Thompson. After impressing on the NorAm circuit in past seasons, Thompson will get his chance to dance with the best as he prepares for his first full season among the Canadian Cowboys on the world cup circuit. After spending the off season training among the veterans; including a stay with Manuel Osbrone-Paradise in Invermere, the young athlete from BC is more prepared and stronger than ever ahead of his inaugural world cup season. The brother of world champion ski cross racer Mariel Thompson, Broderick is continuing a fine tradition of world cup skiing for the Whistler family.

After failing to find the podium last season, 2015 World Championship Super-G silver medallist Dustin Cook will look to start the season off strong on home snow. Cook has been infamous for having some of the best starts on circuit; and failing to maintain the momentum of his fast starts further down the track. After being in the green for many of the races last year, he was unable to find the podium due to his lack of composure at the tail end of the race.

Also looking to hit the snow in Lake Louise, are promising young skiers Brodie Seger and Jack Crawford. Both athletes, hailing from Whistler and the coveted Whistler Mountain Ski Club, are currently with the development team. Seger has yet to make a world cup start but did capture a bronze medal on the NorAm circuit at Whiteface (U.S.A) in the G.S. in 2016. Whereas Crawford made his World Cup debut in the Kitzbuehel Super-G last season.

Six Canadians are in the field for the opening race of the speed season, though they will not be uncontested. With European super-stars Kjetil Jansrud, Peter Fill and Dominik Paris among others providing the competition. Canadas best shot for a podium will likely come from Erik Guay, after he finished 5th in the overall downhill standings last season.

The downhill event will open the weekend on Saturday at 2:00 EST and will be followed by the Super-G on Sunday, also at 2:00. Both events will be streamed live at cbcsports.ca, and will be shown on tape delay at 3:00 EST as part of CBC’s “Road to the Olympic Games” on both days.