June 9 2018, Vancouver, BC- If there is a group of death in this World Cup, this would be it. Argentina are the clear favourites, but the rest of the group is all up for grabs. This group’s runner up will likely be pitted against France, so it is a tough road ahead for whoever gets out of here behind the Argentinians.

Team spirit, national identity, speed and some of the coolest kits are four of the main characteristics that make up this edition of the Nigerian national team.  Gernot Rohr will lead the squad into the tournament and will have a difficult task when it comes to balancing defense and attack in such a tight group, alongside the fact that the Nigerian’s attack is pretty good.

The team has rolled out a series of different formations in friendlies ahead of the tournament, most notably playing a 3-5-2 in their surprising 4-2 win over Argentina in November. However, even though they found success with three at the back, Rohr’s men will likely revert back to the more structured 4-2-3-1 when it comes to the World Cup.

The Super Eagle’s attack is the strongest part of their team. Made up of Arsenal’s Alex Iwobi, Chelsea’s Victor Moses, and Watford’s Odion Ighalho; the premier league trident are the stars of the team and the nations success will fall upon whether or not they can find the back of the net. Ahmed Musa and Kelechi Iheanacho will offer exceptional pace off the bench, a weapon that many teams don’t have. The Nigerians will hope that their attack can outweigh their inevitable defensive errors. 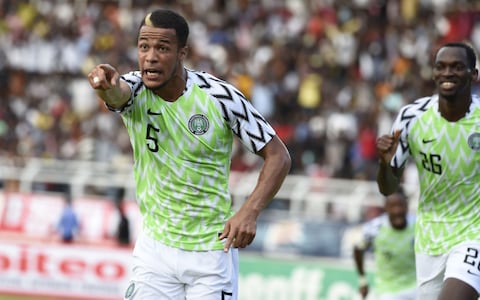 As mentioned before, the Super Eagles defense is a worrying attribute. None of the players play in any of Europe’s top leagues, and have not been tested against world talents other than their time in the national team. Wilfred Ndidi will anchor the defensive midfield and will have to do his best to limit the amount of time the backline has to be involved in the play.

It’s unlikely the team will find any success in the tournament, and that would be unfortunate as having the Nigerians in the tournament adds an element of passion and fervour that other countries don’t. However, the Super Eagles do have some of the tournaments nicest kits; one of the many from this World Cup that have been flying off store shelves.

They shocked the world at Euro 2016 when they shrugged off the English in the round of 16, and after then he Viking’s haven’t stopped their good form. Having qualified for their debut world cup tournament this year, Iceland becomes the smallest nation ever to qualify for the quadrennial spectacle. With a population of 331,000 the country could see a sizeable contingent of their nation travel to Russia to support their team.

The team has been made up of a consistent group of players, allowing them to mesh throughout the Euro’s and World Cup qualifying. Manager Heimir Hallgrímsson has made this a focus to allow them to settle into a consistent lineup and tactics. The team has become world reendowed for their near perfect defense, which allows them to absorb pressure and rely on magical moments from their few exceptional players to support the attack. Captain Aron Gunnarsson, alongside Emil Hallfredsson have formed a formidable defenseive midfield, and having Everton staple Gylfi Sigurdsson in front of them has helped Iceland develop a flow in their transition and counter attack.

While the team’s success may appear to fall upon the shoulders of Sigurdsson, he will not be alone in his hunt for goals. Up front for the Vikings is Alfred Finnbogason of Augsburg who has established himself as one of the Bundesliga’s most clinical finishers in the past couple seasons. Set pieces are this team bread and butter, and with Gunnarssons long throws; their set piece tactics could be used much more often than from only free kicks. 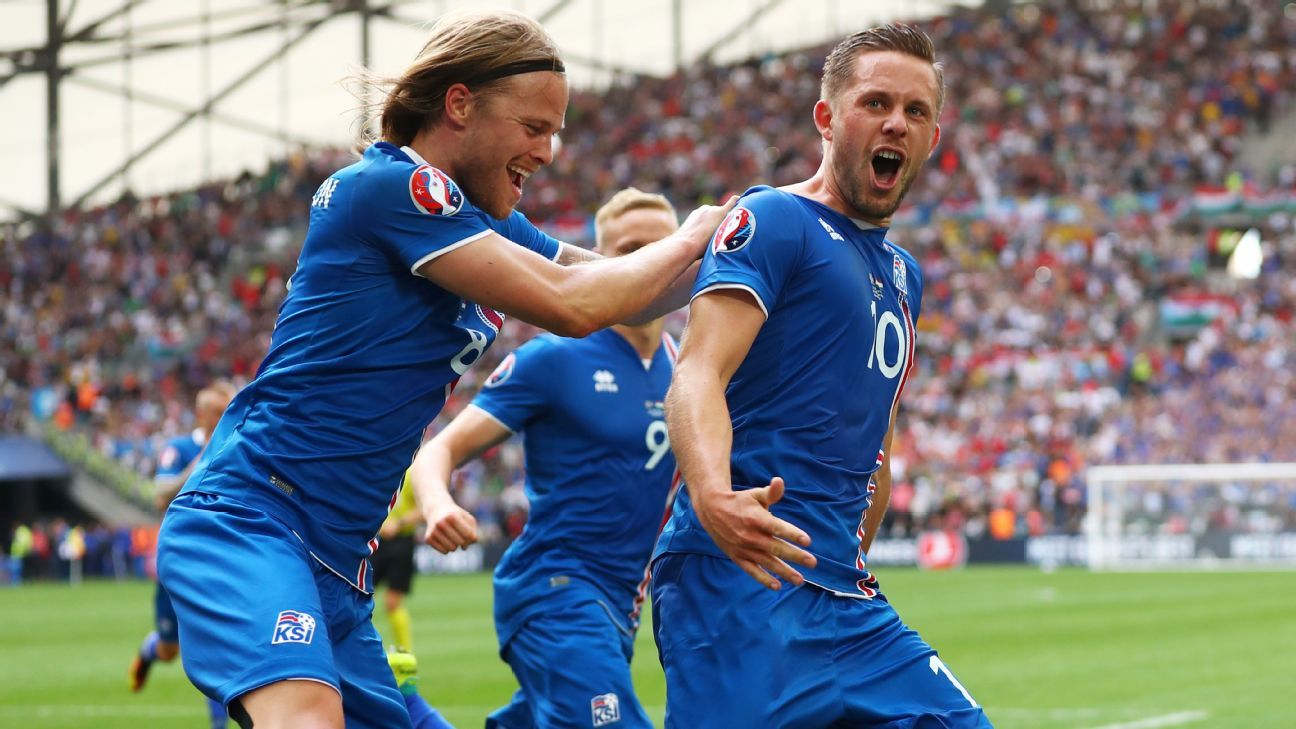 Sigurdssonn celebrates alongside his teammates at Euro 2016

In defense, Iceland have no notable talents other than their goalkeeper Thor Halldórsson who impressed at the euro’s with his size as well as his athleticism. The team defenders well cohesively despite not having many individual stars, and this will prove to be one of their richest strengths throughout this summer tournament.

The side will have some of the best support behind them, with their fans set to lead to now world famous “Viking Clap” at every match in Russia. However, support can help but it doesn’t necessarily win you football matches which of course is the primary concern. To make it out of the group would be a massive achievement and if they manage to get by two of Argentina, Croatia or Nigeria then there is no reason why they couldn’t advance further in the tournament. On paper they are one of the weakest sides, but cohesively this team can shock the world much like they did two years ago in France.

Sporting one of the most iconic looks in world football, the Croatians will look to build upon the success they’ve enjoyed in recent years with a successful World Cup. As one of the tournaments oldest teams, with an average age of 30, the window is closing on this generation of Croatian talent.

The midfield is their most dangerous position, with the likes of Real Madrid’s Luka Modric and Barcelona’s Ivan Rakitic; the midfield is one of the strongest in the whole tournament. In the past, the two La Liga midfielders have played on top of each other rather than alongside, but that is one of the few changes manager Zlatko Dalic has made heading to Russia. Having them play alongside each other allows both of them to control the midfield with their instinctive passing, meaning Croatia’s attack is more centralized rather than relying on the wingers who don’t have as much quality. Much like the Gerrard-Lampard fiasco the English faced in their last generation, if Croatia can get the best out of their two star midfielders they will be unstoppable but that is yet to happen for Dalic’s side.

In goal Monaco’s Danijel Subasic has solidified his spot after yet another strong season in the French league in which he played 39 games en route to his sides second place finish. In front of him he will have a defense core that is led by Liverpool centre-back Dejan Lovren who helped the Merseyside team reach the UEFA Champions League finals this past season. The rest of the defense could be a concern for the Croatians, but the team will likely sit back meaning the defenders won’t have to worry about joining the attack. There will be a lot of reliance on midfielders to back track, especially wingers because fullback has traditionally been a spot where the Croatians have been exploited.

Like the rest of the teams in the group, Croatia should make it out of the preliminary rounds; but with such a tight group it is no guarantee

So close yet so far. Four years have passed since their heart crushing defeat to Germany in extra-time of the 2014 final, and the Argentinians will do everything they can to go one step further in this year’s edition of the tournament. As well as the 2014 loss, La Albiceleste has lost the 2015 and 2016 Copa America Finals to Chile, a team that failed to qualify for the World Cup.

When announcing his team selection Jorge Sampaoli shocked everyone by not including Serie-A leading goal scorer Mauro Icardi in the squad. It is hard to understand how scoring 30 goals in a league famous for world class defending doesn’t get you into your national team picture; but for Argentina, they have an abundance of attacking talent to draw from. Of course leading their attack is one of the world best players in five time Balon D’or winner Lionel Messi, and although the Argentinian’s may not have perfect systems or tactics; having the world’s best player has led them to the edge of success three times. Complimenting their attack will be the talents of Sergio Aguero, Paulo Dybala, Michael Lanzini and Angel Di Maria; all of whom are some of the best in their respective positions.

While the attack is nothing to worry about for them, their goalkeeping situation is concerning. Manchester United backup Sergio Romero had identified himself as the country’s number one ever since he broke onto the international scene, but he will be forced to watch on TV after picking up an injury mid-way through Manchester’s Premier League campaign. This likely means that the aging Willy Cabalero will slot in, and seeing as he never hit the pitch for Chelsea this season; it will be worrying to see whether or not his lack of match play will affect him in any way.

The midfield is made up of two players at the opposite ends of their careers. First is Javier Mascherano who turns 34 during the tournament and has been playing against lesser competition in the Chinese Super League as his career draws to a close. The other midfielder likely to start is 22 year-old Giovani Lo Celso who is playing in his first World Cup. He’s proven he can start attacks and find the incisive ball to forwards in his time with PSG and Argentina hopes he can link up well with Messi to support the rest of the attack.

Anything short of the quarter-finals would be a major failure for the team, and even though the final is likely out of reach; they should still waltz through this highly competitive group. Unfortunately Messi isn’t likely to go down as much of a legend as Maradona, based purely on the fact he never won a World title.