July 13 2018, Vancouver, BC- After finishing with the worst-combined record in the past three seasons, the Vancouver Canucks have been left without a top-three draft pick. Despite their lack of luck in the draft lottery, the Canucks could be on pace to challenge for the Stanley Cup as soon as the 2020-21 season.

The 2018-19 season represents the fifth season of the  Jim Benning/Trevor Linden era of Canucks hockey, and will be the first without franchise players Daniel and Henrik Sedin. With the departure of their star players, the management group has been forced to fully accept a rebuild and the prowess of Vancouver’s amature scouts have accelerated this process through smart draft strategies and in-depth analysis and scouting.

Throughout Benning’s time as general manager,he has drafted top talent in the first round and has uncovered gems in the later rounds. This has led to a deep forward prospect pool and a top heavy pool on defense. So far, four of the last five first round picks have made their NHL debuts; and two of Benning’s fifth rounders have also logged big league minutes.

This coming season will be the first in which the team has committed to their younger players, meaning that many of these hopeful prospects will be tested for the first time in important positions in the NHL.

Elias Pettersson, Adam Gaudette, Olli Juolevi and possibly Quinn Hughes could all challenge for a spot on the team this season; and with their inclusion it would signal the beginning of the next great generation of Canucks players.

The 2017 fifth-overall pick and 19-year-old smashed records and expectations this year as he led his hometown Vaxjo Lakers to the Swedish Hockey League title. Petterson scored 56 points in 44 games, passing Peter Forsberg and the Sedins on the all-time teenage scoring list in the SHL; his season also won him rookie of the year, league MVP and Swedish player of the year in the process.

While he spent most of the season as a right winger, Vancouver will see if he can transition to centre, as that’s what he was drafted to do. Petterson showed he could thrive in this position  in the few games he played there for Vaxjo, as well as in the World Juniors, where he averaged a point-per-game  en route to Sweden’s silver medal.

Canuck’s head coach Travis Green has told the media that he will try to get Petterson play centre as soon as possible, but won’t force him into a position which will diminish his abilities. 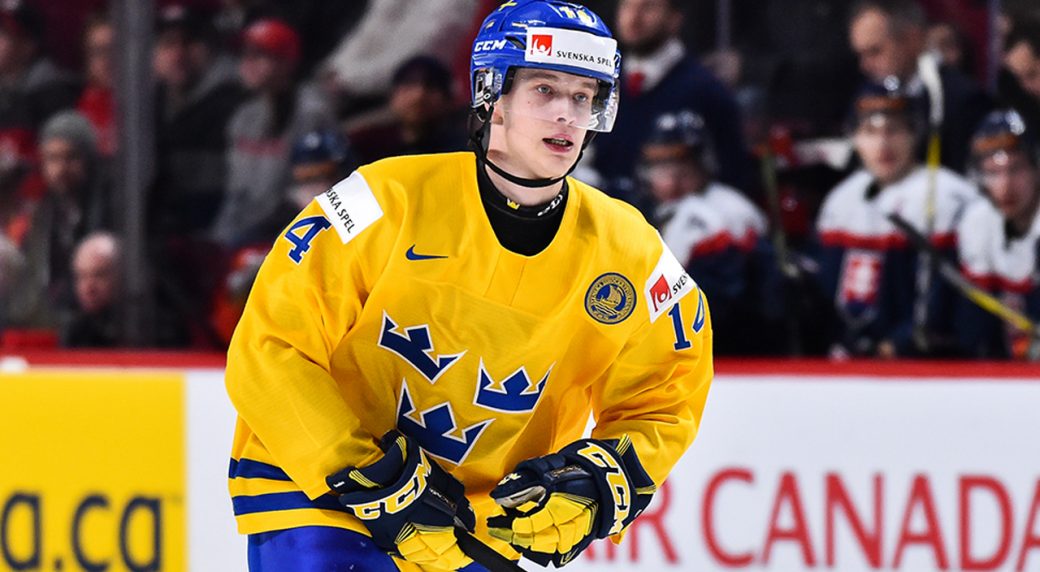 With the departure of Henrik Sedin, Petterson could slot in immediately as a second or third-line centre if the team feels he is ready to play up the middle of the ice. If not, he will likely start on the right side where he found so much success in Sweden.

It’s linemates where it gets complicated.; Petterson is a lighter player and could be pushed around by the bigger, stronger competition in the NHL. If he starts on the right side, the Canucks centre depth becomes and issue. He could play with a “Shutdown” Centre such as Jay Beagle or Brandon Sutter but that may limit his ability to be creative offensively. It will be intriguing to see where in the lineup Travis Green slots Petterson into but wherever he goes the young Swede will give west coast hockey fans something to be excited about for the first time since 2011.

Gaudette is another centre the Canucks hope can help the team into their next voyage as an NHL power. After a surprisingly successful season at Northeastern University, the (year) fifth-round pick earned himself a five game call-up to the Canucks to end the season, and inhis short NHL cameo he failed to earn himself a single point. However, he showed he could be a reliable bottom six forward heading into his rookie season. His best game of his short time came against the Edmonton Oilers, and although he didn’t get on the scoresheet; the NCAA scoring leader had some of the best chances he’s had to find the back of the net.

Unfortunately for Gaudette, there might not be space for him on the Canucks come October. Bo Horvat will be on the first line, and Jay Beagle and Sutter have guaranteed spots at centre, with Elias Petterson, Sam Gagner and Markus Granlund all waiting in the wings it could force the Hobey Baker award winner into the AHL for the majority of the 2018-19 season. While being in the NHL this season would be nice for Gaudette, it is more important for him to be in an impact position two to four years down the road when the team is ready to compete again.

A season based out of Utica could help Gaudette further develop his game and be more clinical when his time comes to be a staple in the Canucks lineup. He has been compared to Ryan Kesler in the past and Kesler played over 100 AHL games before transitioning to a full-time NHL player.

Between Horvat, Petterson and Gaudette the Canucks look to be set for skilled centre’s entering the new era. The three will all be in the NHL making an impact within the next two seasons, allowing the 2021-22 season to be the time where they could flourish and lead the team’s charge towards an elusive Stanley Cup.

Defensively Vancouver has two top-notch prospects, and Juolevi is one of them. Coming off of his first professional season with TPS Turku in Finland, the 2016 fifth-overall pick racked up 12 points in 38 games and has made a name for himself over the past year. hot topic in Vancouver over the past year.

The Canucks passed over players who have already established themselves in the NHL in favour of picking Juolevi, and management has been adamant that he will develop into the top-4 defenseman they hope him to be despite him taking more time than other prospects.

An unnamed NHL scout said that Juolevi will never be a top player, and as time wears on that mantra is rubbing off on the traditionally impatient Vancouver fanbase. In the face of that opinion, former Canuck defenseman Sami Salo thinks Juolevi still has the potential to become elite but has to re-evaluate his work ethic if he is to make the Canucks in the fall. Salo has been watching Juolevi closely in his first pro season as the former Canuck has been an assistant coach with Juolevi’s team in Finland.

“He got better this year as the season went on.” Salo said in an interview with The Province’s Jason Botchford. Salo went on to explain how Juolevi has adapted to tougher situations in his first year as a pro including rebounding after going through a rough spell where he was a healthy scratched for a run of games.

The young Finn’s ability to find that “next gear” will be crucial to whether or not he makes the Canucks right out of camp. Even if he doesn’t; playing in the AHL could be beneficial much like it would be with Gaudette. It’s more important to the big club that Juolevi becomes a stable NHL defenseman within the next two seasons rather than pushing him into the fire in 2018-19.

Next to Juolevi the Canucks have one of the worlds most mouthwatering defensive prospects in 2018 seventh overall pick Quin Hughes. It was a shocker that Hughes fell into the hands of the Canucks at seven, the defenseman was supposed to be taken in the top five and some analysts even had him going as high as three. The Florida born prospect is characterized by his elite skating ability and prowess on the powerplay; two aspects the Canucks have never had in a defenseman. Despite all of his upsides, he is small standing at 5’10” and 170lbs and with this size the prized prospect may not be ready to play in the NHL just yet.

Hughes is coming off of his first college season with Michigan where he made an instant impact and showcased his elite talent against older competition in the NCAA. Although he was on Michigan, Hughes spent a long time away with other teams, especially internationally.

Hughes spent time with the U.S. World Junior team for most of December,finishing three points as he anchored the American defense. The U.S. would finish third behind Canada and Sweden.

Later on,  Hughes was called up to the Men’s World Championships in Denmark in May. Some thought he may struggle  against established NHL players, purely based on his size and inexperience at such a high level of play. However, he silenced his critics as he played top four minutes on the americans defense as the USA went on to beat teams that included world class forwards such as Connor McDavid.

Despite spending so much time away, the freshman defenseman was named to the NCAA and Big Ten all-star teams. Becoming one of the few freshman who have managed to do so.

For Hughes the wildcard comes with the decision of whether or not to turn pro for the 2018-19 season. He is faced with three options. Option one is the most straight forward and that would be to return to college for another season as well as play at the World Juniors in Vancouver come christmas time. Option two would be to sign professionally but to play in the AHL to get used to playing with men and the third option would be to be immediately slotted into the Canuck’s lineup for the coming season.

Upon being drafted, Hughes has said that he feels ready to play in the NHL, and that message has been well-received by the Canucks staff and management. All indications point to Hughes signing a professional deal before the end of August, and once he does he will be given every chance to make the team out of training camp. The only thing blocking him is again the log-jam that is found throughout the Canucks lineup. A defenseman would have to be traded in order for Hughes to join the team but that is a move that  management would make happen to have such a talent join the defensive corps.

Hughes will be the Canucks most important defenseman for the next 10 years and is already the best defensive prospect they have. If he is on the roster this year that’s great; but if he returns to college for another season that is okay too. He’s ready to make an impact, and with comparisons drawn  to Erik Karlsson the Canucks seem to have a franchise defenseman on their hands as they head into the new era.

In 2020-21 all of these players will be entering their prime and will have a couple of NHL seasons under their belt. The powerplay will be one of the league’s best once it’s orchestrated by Hughes and includes Petterson, Boeser and Horvat. And as history has shown, a strong powerplay is a key point that championship teams are built around.

These are only four players who headline the prospect pool and will un-doubtly be complimented by a slew of other players that the Canucks scouts have found throughout the draft and undrafted avenues. Other prospects like Thatcher Demko, Jett Woo, Jonathen Dahlen, Petrus Palmu among others will all contribute to the future of the hockey club and the possibility of a 2020-21 Stanley Cup run.

Despite their lack of lottery luck the Vancouver management and scouting have done an astounding job to make the transition into the post-Sedin era as smooth as possible.