VANCOUVER – The 10th-ranked UBC Thunderbirds found their second win in two days as they defeated the Thompson Rivers WolfPack 3-0 on a dreary, wet Saturday night at Ken Woods Field. The Thunderbirds were able to build off their 2-0 win against UBC Okanagan on Friday night, while Thompson Rivers was unable to rebound from their 3-0 defeat to Victoria.

In net for UBC was first year goalkeeper Sarah Johns, while between the posts for the WolfPack was Marissa Young.

With the field and the ball wet and slippery, both teams were challenged by the elements right from kickoff. The first chance didn’t come until the 20th minute when a shot from 25 yards from Emma Kallner was stopped by Thompson Rivers goalkeeper Young. Young spilled the ball and the second attempt was fired off the post, although the second effort was called offside. 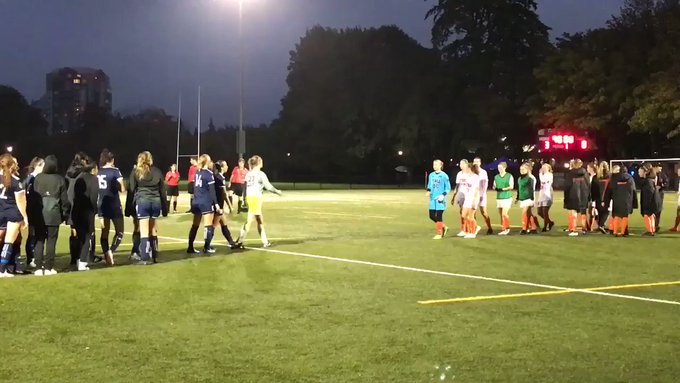 The deadlock was broken in the 31st minute with a goal from freshman Melissa Bustos. Danielle Steer came down the wing and brought the ball to the touchline before pulling it back to Bustos who fired a first time shot into the top corner. UBC would add to their lead just six minutes later, this time it was Steer who got the goal herself. A long shot from UBC’s Amelia Crawford was spilled in front of the net by the TRU goalkeeper, and was followed up with a tap in by Steer. The Thunderbirds would continue to pepper the WolfPack net with shots, putting up 10 shots in the first half.

At the beginning of the second half each team made a slew of substitutions. UBC brought in Emma Peckinpaugh, Janika Sangha, and Liesanne Musico while subbing out Sophie Damian, Sabrina Anderson and double assist contributor Amelia Crawford. While the Wolfpack took out Shae Fauco and Katherine Walkely in favor of more attacking players in Robin Price and Abbie Simms.

Neither team had many chances throughout the half as the game was tightly contested in the midfield. UBC maintained their lead and looked to simply see the result out. Although their effort was more focused defensively, the Thunderbirds did add a third goal in the 76th minute with a hammering strike from ten yards off the boot of Michelle Jang to make it 3-0 for the hosts.

The final 15 minutes saw a number of chances for Thompson Rivers go astray, with their best chance coming off a corner kick with five minutes to go. The ball was sent in by midfielder Marisa Mendoca and landed on the head of Camryn Curts, whose aerial effort missed the UBC net by just a matter of yards. It was TRU’s best chance of the night, and it came after the game was pretty much out of reach. 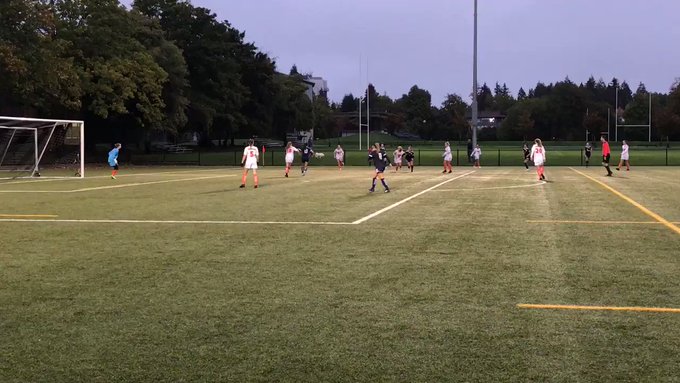 “We had six first-year players feature for us tonight, I’m delighted by their effort and ecstatic for both Melissa (Bustos) and Michelle (Jang) tonight with both of them getting their first goals as Thunderbirds,” said UBC head coach Jesse Symons. “Every one of my players has put in outstanding defensive efforts the past two nights and they should be proud of themselves for that.”

After winning two games in two days, the Thunderbirds will now go on to face Northern BC on Friday night in Prince George, while the WolfPack will return home to Kamloops to take on both Trinity Western and University of the Fraser Valley.