September 27th 2018, Vancouver-   The Carl Robinson era in Vancouver has come to an end. September 25th saw the Welshman as well as the rest of his coaching staff all relieved of their duties. After being with the club for seven years, Robinson’s departure leaves a gaping hole within the organization. The fourth longest tenured coach in MLS was fairly successful in his time at the helm, bringing Vancouver to two conference semifinals in 2015 and 2017. In the meantime, academy technical director Craig Dalrymple will take charge of the first team, however, he is unlikely to be the long term solution.

Whitecaps FC president Bob Lenarduzzi addressed the media after announcing the departures, and signaled that the search for a head coach has already begun. While the club has yet to approach anyone, there are a number of names available both with MLS experience and without. Being such a difficult league to maneuver; it is more than likely the Whitecaps will appoint someone with experience in the league. There are three coaches that the ‘Caps could possibly lure their way, and here at Van City Sport we will look into those candidates.

The least likely of the three is Sigi Schmid. The former Seattle Sounders coach has had a wildly successful career.. His experience and stature dwarfs the other two coaches in this article. Schmid has had two spells as the U.S national team manager and has spent time with Columbus Crew and LA Galaxy, winning an MLS cup with both the Galaxy and The Crew. His teams have traditionally played a very attack minded style, something that would be well received to a Vancouver fan-base who has endured the “buckle-down” approach of Robinson for the past five seasons. He’s the most winning coach in MLS history, but his teams have always had big budgets; something the whitecaps aren’t able to compete with. Yes, Vancouver is receiving up to $23 million for Alphonso Davies, but if Schmid were to come here; he would likely demand a hefty salary, taking the fund away from possible first team DP’s. Although Schmid has had a history of success in the league, he is not likely to be the right fit for Vancouver heading into 2019. 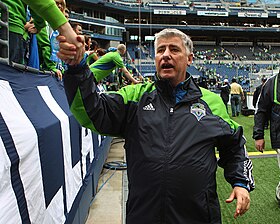 The second man on the list has also had tremendous success in Cascadia. As the Timbers coach for six seasons, Caleb Porter could be the perfect fit for the Whitecaps. Portland has always been on par with Vancouver throughout the two clubs time in MLS, with both clubs having similar payrolls and similar results in the standings. Although the regular season finishes have been nearly identical, Porter led the timbers to the MLS Cup in 2015. In that championship winning season the Timbers had the leagues 7th highest payroll, while the Whitecaps trailed by only one spot in eighth place. The 2013 MLS coach of the year has shown he can have success with a financially limited roster in a market like Vancouver; leading one to think that he would be the perfect fit for the ‘Caps. The only problem with Porter is that he was very loyal to the timbers and their fans during his time in Portland; would he risk all that trust he built and come behind enemy lines? Likely not. However, If the Whitecaps could get their hands on the Tacoma native, it could lead to success in the very near future. 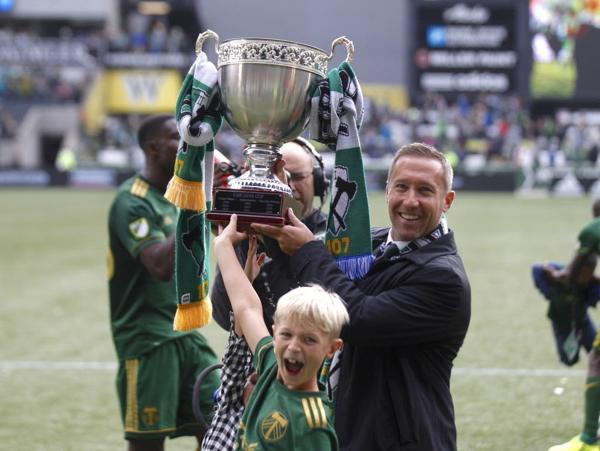 Porter with the Cascadia Cup. Alongside being a coach, Porter was also a passionate fan.

We’ve saved the most likely for last. Drumroll please…

It’s Marc Dos Santos. First of all he’s Canadian, which is a big draw for the Whitecaps and one of the major reasons why he would be hired as the head coach. Although some fans want this fact to be disregarded, it largely doesn’t matter as Dos Santos could prove to be the right pick for the job regardless of citizenship. The 41 year-old manager has experience in all levels of north american soccer, having been a head coach in the now defunct NASL, as well as the USL and an assistant with MLS’s LAFC. Alongside his north american managerial experience, Dos Santos has also managed teams in Brazil and has spent time as an interim manager of the Canadian National Team. His wealth of experience is a major draw for the whitecaps, as it shows that he knows how to be successful in different situations.

The Montrealer’s  playing style may not be as earth shatteringly exciting as Schmid’s or Porter’s may be, but he is a steady hand who could guide the Whitecaps to success in the future as well as the present. Since his name does not have the same draw as Schmid’s does, he would demand less of a salary; leaving more money to be dispersed among the first team. If Dos Santos were to be named the head coach, he would jibe perfectly with owners and would likely unearth some talented players with the limited money on offer. Since he has not had an MLS role in the past he has no history of the type of player he would bring in, but his connections in Brazil could lead him in a south american direction. Being Canadian, having experience and being on the same page as ownership means that Dos Santos is the most likely candidate to land the job.

Whichever coach is picked will inherit a roster that has been built from the ground up by Carl Robinson. The team is filled with “Robbo’s guys” and it is unlikely that any other coach would agree with the squad he has assembled. With a new coach, and star youngster Alphonso Davies departing the club a rebuild is on the horizon for  the Whitecaps. The first step is naming the coach, once that happens things will begin to materialize.