It’s all over for the Vancouver Warriors, who fell 15-9 at  the hands of the Toronto rock in their final game of the season. The Warriors have now completed their first season downtown, and in most regards it was a success.

he team was overhauled to the best of their abilities last off season, despite not having any first round draft picks. Friday’s matchup against the Rock was the two teams lone meeting this year, and for the Warriors; all they had to play for was pride after being eliminated last week with a 13-4 loss against the Rochester Knighthawks. The Warriors season has been an improvement on last year, although they still missed the  NLL playoffs. In 2017-18 Vancouver won only two games, but this season they finished with a 5-13 record, just missing the playoffs by a pair of games.

The Warriors have struggled to start games strong this season. More often than not, they concede a goal on the first play of the game and Friday was no different. Vancouver Lost the opening faceoff, a common theme this year, and  allowed Toronto to gain control. The Rock then set up quickly, leading to a skillful opening goal mere seconds into the game.

Vancouver’s first goal of the night was a weird one. It completely caught Toronto goaltender Nick Rose by surprise. Warriors’s Logan Schuss brought the ball to the left faceoff dot, and fired an odd shot to the near side of Rose. Rose was clearly not anticipating the attempt, and failed to get close to the post; allowing the ball to sneak through.

Friday night was a game of passion for the Warriors, and presented the chance for some history to be made. Most notably, local boy Mitch Jones came into the night just three goals shy of his career best. He had already tied his career best in assist with 43, and sat at 35 goals before ball drop. 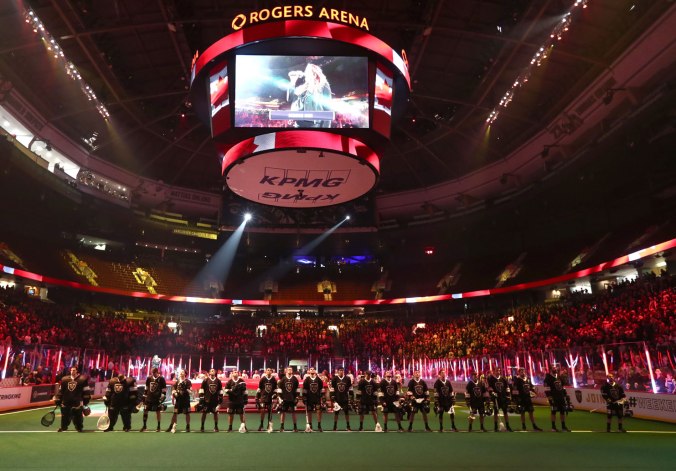 Within the first 20 minutes, Vancouver had taken two penalties; and were hemmed in their own zone for the entirety of both of them.

The first one they got off lucky, not without some help from Eric Penney. The second however, they were bad, like really bad. The Rock controlled the ball with much finesse, before sliding a soft one past Penney for their first power play goal of the night.

Despite conceding goal after goal after goal, the Warriors never gave up in the second quarter. While the shots were close the whole half, Toronto was converting at a much higher rate. After the Warriors scored their second, Toronto would go on a  four goal streak. Many teams could fold at that point , but not the warriors. Vancouver’ Keegan Bal got his second of the game to get the warriors back on the board and cut the lead down to four.

Keegan Bal was a man on  mission all night, especially in the first half. Vancouver finished the half trailing 8-4, although Bal scored 3 goals in the half. He led from the front and carried the team on his back.the first half brought him to 31 goals, moving him into a tie with Jordan Mcbride for second most goals on the team.

Despite the warriors best efforts, they seemed destined not to win a faceoff. This has been a problem all year, and only got worse in Friday’s loss. Going into the Toronto match, the Warriors has lost 291 faceoffs, compared to only 156 won. That success rate is the worst in the league, seven percent lower than the next worst team. Jarett Toll was the Warriors main faceoff man, but never found any success. Logan Schuss, Mitch Jones and others filled in at times, but to no avail.

Trailing by four goals with five minutes remaining the Vancouver Warriors scored what could be the goal of the season. From his own end, Vancouver captain Matt Beers sent a full rink length pass to Ben Goodwin, springing him on a breakaway. Goodwin quickly turned the ball, and slotted it neatly past Nick Rose.

“That could be the goal of the year” NLL.com’s Adam Levi Said after seeing Vancouver cut the lead down to three.

While Vancouver has scored some impressive goals this year, this whole play was something else.

After the game head coach Chris Gill said “It was really loud, loudest game of the year, we are sorry we couldn’t win for them.”\

While the crowds of an average of over 6000 have been a boost from the  league worst 3500 last season at the Langley Events Centre, Friday nights meaningless game was one of the most exuberant crowds of the season.

What went in to this? Well, there were many things that should have happened in the first game. Tickets were cheaper, beer was free, the upper bowl was curtained off the atmosphere was catered to a more fun loving young crowd. That’s not a knock on what the warriors did throughout the year, but if they had all these in game one; attendance could have been even greater.

Nonetheless, the crowd Friday night was one of the best, and as Gill said, it is unfortunate that the Warriors couldn’t send the fans home with a win on their minds.

The 15-9 loss was all she wrote for the Warriors inaugural season downtown. Over the next few weeks Vancity Sport will go more in depth analyzing Vancouver NLL campaign. All in all, this season can be considered a success. The attendance numbers were not what they hoped to be, and still pale in comparison to other NHL (National Hockey League) owned teams. However, Vancouver has shown in the past that it will show up for a winner. If the on-field product is playoff worthy next season, the fans will come. Just watch Vancouver, The Warriors are a sleeping giant, and once they win, my bet is the city will fall in love with lacrosse.