Vancouver. October, 2, 2018- The Vancouver Canucks are about to enter the unknown. The 2018-19 NHL season will be the first of a generation that does not include the Sedin twins. Not many athletes have captured the hearts of a city like the twins did, and their presence will be missed both on and off of the ice.

The Sedin’s departure ushers in a new generation of Canuck’s players, and hopefully fans; as they club tries to return to their glory days of 2011.

While the Sedins were a part of the team, management had gone on record saying it was unfair for the Sedins to have to suffer through the losing years of a rebuild. This led the club  to bring in veteran players in hopes of icing a somewhat competitive lineup in the twins final years. As the twins called it a career at the end of last season, the front office has approached the rebuild with more force; allowing young players to begin to take the reigns of the NHL  club. The first instance of the organization being committed to this plan came on October first when the team placed veteran forward Sam Gagner on waivers allowing room for 23 year old Tyler Motte to stick with the big club.

This change in attitude came to the delight of many fans, and to the chagrin of a smaller; yet sizable population. Young players don’t tend to bring instant success, so icing a roster filled with them may not be the best of ideas if the aim is to win this season. Luckily general manager Jim Benning has publicly stated that the team is not in the place to have Stanley Cup ambitions this season; saying  “it’s just too far fetched.”

The Canuck’s lost over 100 points when the Sedins announced their retirement, and the club has not filled that hole heading into the new season. The club is welcoming in highly touted rookie Elias Pettersson after he lit up the swedish elite league last season, but he is the only offensive talent to be added to the roster. Rather than addressing their scoring needs through free agency, the Canucks acquired “grit” players in Jay Beagle, Antoine Roussel and Tim Schaller. All three players are established in the league, although they certainly do not fill the Sedin shaped hole left in the Canucks offense.

Vancouver  finished with the fifth least goals scored last season, and now they have to try to improve on that without their offensive leaders. One of the few bright spots of last season was the progression of all-star rookie Brock Boeser. Boeser scored 29 goals before his campaign was cut short in march after sustaining a back injury, alongside his goals; Boeser brought an excitement to the Canuck’s offense that was missing in recent years. Bo horvat also contributed with yet another 20 goal season, despite missing a large chunk of the year as well. Both Boeser and Horvat will be heavily relied upon this season to provide the bulk of Vancouver’s scoring, likely as first line and powerplay anchors; a role they only began to grow into last season. Helping them out will be Elias Pettersson, although the 19 year old rookie is unlikely to replace the Sedin’s offensive contributions. 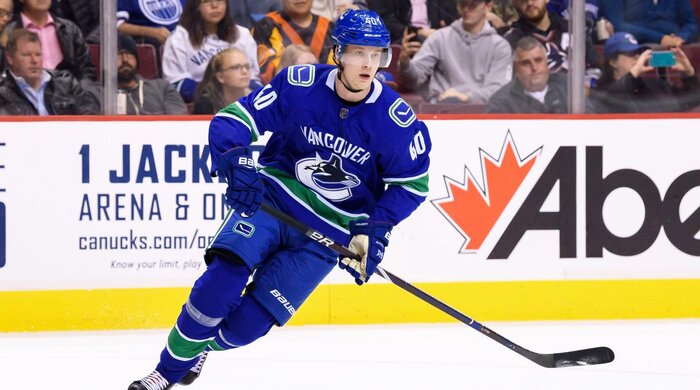 The three of them will make up half of the Canucks top sx forwards, a group that could conceivably score a decent number of goals. Horvat will be the number one centre, with Boeser on his right side; and after a successful pre-season it looks as if Petterson will be the second guy down the middle. The questions in the top six come down the left side of line one and on both wings of line two. Brendan leipsic, Nikolay Goldobin, Louis Erikson, Brandon Sutter and Sven Baertschi are all top six players who could possibly fit alongside the team’s three offensive threats. Regardless, the Canuck’s will rely on their top two lines to provide nearly all of their offense, as the bottom six is built to grind out games rather than score goals.

On defense GM  Jim Benning clearly didn’t understand Albert Einstein when he said “ the definition of stupidity is doing the same thing over and over and expecting a different result.”

Following a year in which the Canucks finished with the sixth worst defense, and the lowest defensive scoring record the team  returns with the exact same group of defenders as they had on opening night in 2017. It was hoped that 2016 fifth overall pick Olli Juolevi would aid the defense this year but he did not look ready for the NHL in his pre-season audition; leaving the Canucks with the same problems that ended last season set to begin this one. Once again Chris Tanev and Alex Edler will anchor the defense, but Vancouver  will have to hope for bounce back season from every other member; most notably Erik Gudbranson and Ben Hutton. Gudbranson is supposed to be a physical force who can bully opponents much like Boston’s Zdeno Chara while Hutton is meant to be an offensive juggernaut quarterbacking a skilled powerplay. Neither of them have fulfilled their role in their time with the Canucks, and 2019 could be their last chance to show that they can make it in the league. Despite not being on the opening night roster Juolevi will play a role for the Canucks this season, as he will be the first call up from Utica once the NHL team hits injuries. The hope is that Juolevi can grow in the AHL and force his way into a key role for the Canucks sometime this season. At this point the  defense cannot get much worse, so any change is positive.

Much like the defense, goaltending was not altered at all this off season. Vancouver returns with one of the league’s worst goaltending tandems. Featuring two massive swedes who are seemingly unable to stop many pucks. Coming off his first season as a starter Jacob Markstrom will once again assume that role.For much of last season he was barely average, although his game did pick up down the final stretch when the games did not matter. His backup Anders Nilsson began his Canucks career with a bang posting two shutouts in his first three games, but things have gone down a steep hill from there. Neither goalie will steal many, if any games this season; but if the team can receive at least average goaltending it might give them a chance to win occasionally.

The power play will piggyback off the skill of the top six, allowing the teams most skilled players to start opportunities on the man-advantage. The first unit is likely to be made up of Horvat at centre, Petterson and right wing, Goldobin on the left with Boeser and Edler manning the blueline. The powerplay will need to be successful for the Canucks to have any hope of competing this season, as they are unlikely to score many goals at even-strength. That powerplay unit is one of the few features of this season that is tantalizing to Vancouver fans and could be worth watching this season. On the penalty kill is where the free agent acquisitions could prove their worth. Jay Beagle and Antoine Roussel have both had successful careers as penalty killers and the Canucks hope they can help a team that finished 21st in the league on the penalty kill last season.

Through seven preseason games Vancouver won one of six and were outscored 30-10. Not much is likely to change come opening night. In the end these Canucks will let in a lot of goals, and there probably won’t be many scored. In sports that equation leads to losing. A lot of it. This season isn’t going to be about wins/losses; it will be defined by young players progression. Elias Pettersson will  be fun to watch, and that powerplay could be entertaining but those will be the only “exciting” things about this years Vancouver Canucks.